No special open houses or events are scheduled at this time at Cherry Spring School. Check our Events Calendar for other Friends-sponsored events to attend.

The Cherry Spring Community Club regularly uses the schoolhouse and pavilion for their meetings. They meet monthly on the second Friday evening to play 42 dominoes . On the second Saturday in September, club members, families, and friends also hold a BBQ picnic or potluck picnic.

To schedule a visit or tour when the school isn't conducting a scheduled open house, call the Cherry Spring rental contact person below or complete our Contact Us form and select Cherry Spring School from the dropdown. Include the date/time of your request along with details. 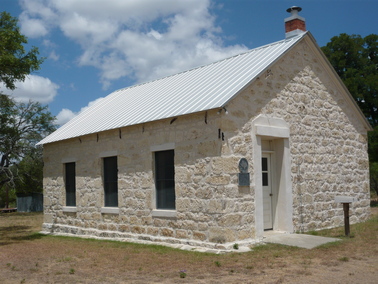 Built in 1885. Pavilion built in 1935. Consolidated in 1962. During the school year, the stage area of the Cherry Spring School pavilion was converted into a classroom by securing moveable walls across the front of the stage. A colorful canvas stage curtain was purchased in the mid-1950's and was kept rolled up above the proscenium during the school year. Featuring a landscape scene surrounded by ads for local merchants, the curtain was lowered between scenes of school closing plays. The curtain is now on display in the recently restored and remodeled pavilion. Among the historic schools in Gillespie County, there are still six original curtains, and several of the merchants whose ads appear on those curtains are still in business today.

Classes for the children of German immigrants in the Cherry Spring community were held in homes until 1885. At that time, a 31'x23' schoolhouse was built, using locally-quarried limestone on land donated by H. Bratherich. On dedication day, students marched in a parade from the homes, where classes had been held, to the new building. Cherry Spring, District #16, added a large pavilion in 1936 despite the Great Depression. The stage area had moveable walls, which allowed it to be used as a second classroom. Grades one through five met in the "Little Room" on the stage, while grades six through nine met in the original rock building, or "Big Room".

In the early days, students walked, rode bicycles, or came by horseback. Saddles were stored in the "saddle shed", where the horses were tied. They would stand there until school was dismissed. One student in the 1920's even rode a donkey. Like clockwork at 11:45 a.m. almost every morning, the donkey would bray, dismissing everyone for lunch.

Each May, school closing celebrations were anticipated by the entire community. While visiting with neighbors and other acquaintances, attendees were entertained with oompah music, plays, and baseball games. Hundreds of pounds of barbecue were prepared on the large open pit to feed the crowds.

The Cherry Spring School served the community residents until 1962, when it was consolidated with Fredericksburg ISD. During the 76 years school was held at Cherry Spring, almost 400 students and 42 teachers passed through the doors. Today, the school is a landmark of early education in Gillespie County. On May 11, 1990, a state historical marker was placed on the rock school building.