No special open houses or events are scheduled at this time at Luckenbach School. Check our Events Calendar for other Friends-sponsored events to attend.

The Luckenbach Community Club meets monthly on the first and second Friday evenings and fourth Sunday afternoon to play pinochle cards . In 1982, a Texas Historical Commission marker was dedicated.

To schedule a visit or tour when the school isn't conducting a scheduled open house, call the Luckenbach rental contact person below or complete our Contact Us form and select Luckenbach School from the dropdown. Include the date/time of your request along with details. 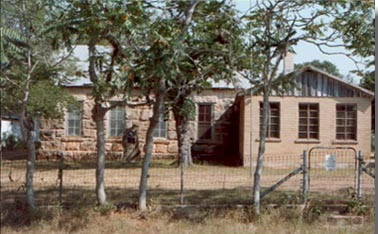 A brief history of Luckenbach School

Built in 1881. Expanded in 1905. Consolidated in 1964. An old-fashioned school bell summoned the children to class at 9 a.m., six days a week. Boys lined up on the right and girls on the left. During recess, children played games such as "Andy-Over", "Stink Base", Dodge Ball", "Drop the Hankie", and "Kick the Can." At the end of the day, at 4 p.m., the older boys had to bring in firewood for the stove, and the girls had to sweep the floor. First graders were responsible for cleaning the erasers.

On July 22, 1855, two acres of land along Grape Creek was purchased from Peter Pehl for $4. After the land was acquired, the men in the community gathered to build a 16'x15' log cabin schoolhouse. Due to an increase in the student population by 1881, the building became too small to accommodate all the children, so a 10' addition of native limestone was built. The Luckenbach School was designated as District #3. Families who settled in the community paid one dollar per year for their children to attend school. Many of these families are still represented in the area today.

During the 1860's, a one-room stone teacherage was built. The floors were made of 16" wide planks from Indianola, Texas. and the rafters were hand-hewn. Another room was later added to join the teacher's house to the school. In 1905, a new 25'x34' schoolhouse was built of native limestone from the Pehl property, some of them measuring 22"x54". An old-fashioned school bell summoned the children to class, with the boys lining up on the left and the girls on the right. Older students would help the younger ones with grammar and math. Some of the creative games played during recess were Andy-over, stink base, dodge ball, drop the hankie, and kick the can.

In 1949, due to the passage of the Gilmer-Aiken Law, which limited the number of students per teacher, Luckenbach became a two-teacher school, with grades one through eight. During that year, another room, measuring 18'x24', and constructed of hollow tile, was added to the school building.