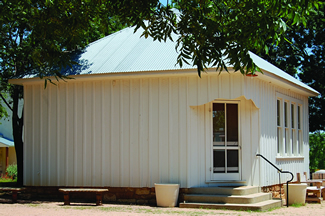 White Oak School was located on 1.1 acres of land approximately 15 miles southwest of Fredericksburg. The White Oak community derived its name from the oak trees abundant in that area, which produced a somewhat softer and whiter textured wood than the common oak. Land for the school was purchased from John Jordan in 1892 for one dollar. Evidence still remains of a foundation from a previous school directly across the road.

The History of White Oak School

Built in the 1920s, the present schoolhouse is a one-room wooden building with a tin roof. The first furniture consisted of crude tables and benches made by the school trustees. The school always had one teacher with grades one through seven. Grade eight was taught in later years.

The teacher was required to speak both English and German. The first teacher was A. D. Fischer, who received a monthly salary of $30. Families were required to pay an $8 annual fee and 45 cents per month for each pupil, which later increased to $1. This was the main source of support for the school. If funds were short, a collection was taken.

Until the second school was built and a cistern installed, two students carried water in a bucket from a neighboring farm. Every pupil drank out of the same tin water cup. Lunch from home consisted mainly of homemade bread, boiled eggs, butter and jelly bread, and sausage. During recess, the pupils and teacher pulled broom weeds and tidied the grounds. Pupils swept the school, cleaned the blackboards, and dusted erasers every afternoon. When time permitted, the students played games. In later years, baseball games were scheduled with the neighboring schools of Tivydale, Wrede, and Morris Ranch.

The schoolhouse and its outbuildings were donated by the Charles Feller family in 1990 and moved to the Gillespie County Historical Society's Pioneer Museum Complex in Fredericksburg.