No special open houses or events are scheduled at this time for Willow City School. Check our Events Calendar for other Friends-sponsored events to attend.

The Willow City Community Club was organized on May 12, 1961. The Club meets monthly on the first Friday at 6:45 p.m. for a light meal. A short business meeting is held at 7:30 p.m., followed by games of 42 dominoes and socializing.

To schedule a visit or tour when the school isn't conducting a scheduled open house, call the Willow City rental contact person below or complete our Contact Us form and select Willow City School from the dropdown. Include the date/time of your request along with details. 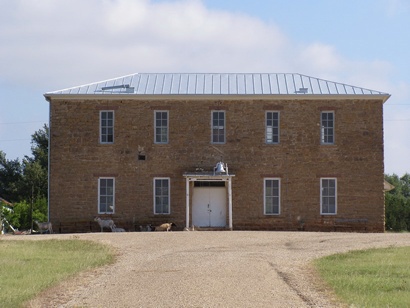 Built in 1905. Consolidated in 1961. Some students brought lunch in half-pint jars with their names carved on the lids. At other schools, students used lard or molasses buckets with a wire handle, white flour bags, or later even lunch boxes. There was always a designated place where lunches were stored. Lunches consisted of homemade bread, boiled eggs, butter and jelly bread, headcheese or kochkäse (cooked cheese), and dried meat or sausage, in addition to fruit and cookies.

The Willow City School District #804 was in the northeastern part of Gillespie County, with its northern border extending to the Llano County line. 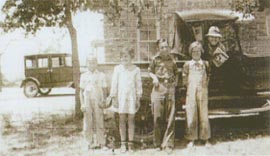 English-speaking settlers of the Old South and of Scotch-Irish descent, together with a sprinkling of German settlers, became the backbone of the community. In addition to the more substantial settlers of Willow City, a great deal of riffraff used the town as a "hangout" at the turn of the century. Drawing a knife in a fight between school youngsters was quite a common offense. There was also a report of teachers wrangling with a school boy to take a six shooter away from him.

The first school was a one-room log cabin, which also served as a church. R. C. Roberts, who came to the community in 1876, described the schoolhouse as "a one-room log cabin, no longer new". It had split log benches and no floor. After severe flooding, a two-story frame schoolhouse was constructed in 1890 on higher ground. This building had two classrooms downstairs and one large classroom upstairs with an outside stairway. A bell tower summoned the students to class.

It was early in 1905, when the Willow City District became independent, that it was decided to build a new school. J. W. Lindeman and J. C. Hardin each donated a plot of ground, and after a bond issue, the new, two-story hickory-sandstone school building became a reality. Large granite rocks form the lintel on all the windows. It had school rooms on the first floor and one room on the second. The second floor served as an auditorium and classroom during the years when there were three teachers. This room also had a stage. Improvements were made to the building in 1915 in order to obtain state aid. Ventilators were added. A partition was built on the first floor to create an entrance hallway, and blackboard space was added. The school had no water supply until 1920 when a well was drilled. Until that time, students brought their own water from home or a resident living close to school supplied water. In the 1950's, restrooms were added to the north side of the building. With three teachers, one for each room, grades one to nine were taught through 1956. Then in 1957 with two teachers, grades one to eight were taught. The 9th graders went to Fredericksburg for high school. Willow City Independent School District was consolidated with Fredericksburg Independent School District in 1961.