Open House Activity:
"School Days": Come tour the renovated teacherage and learn what it was like going to school in the early 1900's and the fun things students did.

Soon after consolidation, Crabapple Community Club was organized. It remains active today with the Club meeting monthly on the first Sunday at 2:30 p.m. to play dominoes and other games. The facility is also used for other functions, such as wedding receptions, reunions, elections, birthday parties, and St. John Lutheran Church functions.

To schedule a visit or tour when the school isn't conducting a scheduled open house, call the Crabapple rental contact person below or complete our Contact Us form and select Crabapple School from the dropdown. Include the date/time of your request along with details. 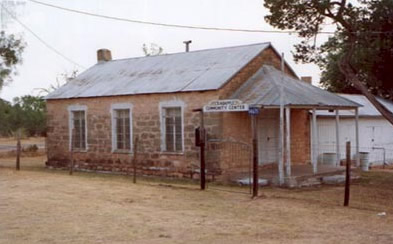 A brief history of Crabapple School

Built in 1882. Teacherage in 1878. Consolidated in 1957. Typically, the land for the schools was donated or bought for $1. At Crabapple, Crockett Riley and Mathias Schmidt decided to have a foot race to see who would have the privilege of donating the land. Mathias Schmidt won, and the school was built on his donated land.

German immigrants, who came to Fredericksburg in the 1840's and later, settled in the Crabapple area. Many parents were eager to donate land so a school could be built near their homes. The two families who were extremely anxious to give the land for a school were Crockett Riley and Mathias Schmidt. It was decided to have a foot race to see who would have the privilege of donating the land. Mathias Schmidt, a farmer, won the race. The school was then built on the land he gave for this purpose. The families donated their labor to erect a school building of native limestone which opened in 1878 as Crabapple School #10.

This first building was a two-story rock house consisting of two rooms. One room was a used as a classroom, with the other used as living quarters for the teacher. The upstairs, used for storage, had an outside stairway. About 10 years later, another room was added. Between 1887 and 1910, this building also served as a post office. In 1882, the second school building was built of limestone at a cost of $600. It not only served as the school, but also as the Lutheran church, until the congregation built their own church nearby in 1897.

There was only one teacher to teach all grades. The highest enrollment was at the turn of the century with about 40 students. Teachers salaries ranged from $80 per month in the 1920's to $250 in the early 1950's. In all, 28 teachers taught at the Crabapple school.

Crabapple School was consolidated with Fredericksburg Independent School District in May 1957, when only nine students remained. In September 1994, a historical marker was placed at the school. 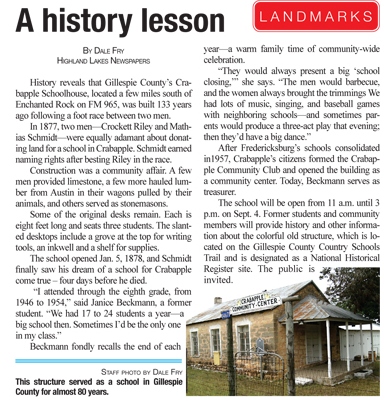