The Club meets monthly on the 3rd Friday evening for a social to play 42 , straight dominos, and pinochle cards . The meetings are open to the public. Guests are invited and new members are always welcome. The mission of our organization is to restore, improve, and maintain the historical Cave Creek School property and to utilize this wonderful site as a community center for the use of our friends and neighbors. We have accomplished most of our goals since our organization was formed in 2005.

The school has been used as a precinct polling place since 1889, and it is also the clubhouse for the Cave Creek 4-H Club.

A bird watching station has been added to the school.

To schedule a visit or tour when the school isn't conducting a scheduled open house, call the Cave Creek rental contact person below or complete our Contact Us form and select Cave Creek School from the dropdown. Include the date/time of your request along with details.

#11 on the driving map (Route B) located at 470 Cave Creek Road (11 miles northeast of Fredericksburg). 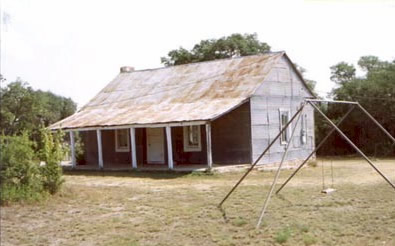 Built in 1881. Consolidated in 1950. The children came to school from 9:00 a.m. to 4:00 p.m. They brought their lunches from home and either walked, rode horseback or a buggy to school. The horses were kept in the school pasture during school hours.

In 1865, John Ebert deeded eight acres for a school. Organized in 1870, the school was named Cave Creek for a nearby creek which had some natural caves. The one-room school was finished in 1881, just in time for school in September. Students cleaned the schoolhouse and carried in the wood for the stove, which was located in the middle of the building. This wood stove is still in use today. The students traveled to school on foot or by donkey.

Along with the natural caves in the area, there is also a man-made cave in a creek bed not far from the school which was dug and inhabited by a hermit named Berg. The story is that he made whiskey and sold it in the area. Not knowing much about the laws, he was told his activities were illegal and not to get caught. The students at Cave Creek often toured Berg's Cave.

James A. Larson was the first teacher at Cave Creek. In the 68 years of the school's history, there were 20 teachers. A record of 82 students attended in 1917 when Miss Cora Hahn was the teacher. Sometime in the late 1920's or early 1930's, a stage and pavilion were built. School closings in May were community affairs and always well attended. Entertainment included the children's program and graduation in the afternoon. For the evening meal, some of the men cooked BBQ which was sold by the pound. Families brought side dishes, and blankets were laid on the ground for a picnic. Adults, who previously attended Cave Creek School as children, would present a play in the evening. A dance in the pavilion followed the play. The school was closed in 1950 when it was consolidated with Fredericksburg Independent School District.