Meetings on the 3rd Friday, February-June and August-November, for a social and card and domino games. July fireworks watching is observed.

The Wrede Bear Creek School Community Club was reorganized in November, 2001, with 15 former students present. The Club meets on the third Friday at 6:30 p.m. from January-May for a meal, fellowship, card and domino games. July 4 fireworks watching at 6:30 p.m.

To schedule a visit or tour when the school isn't conducting a scheduled open house, call the Wrede rental contact person below or complete our Contact Us form and select Wrede School from the dropdown. Include the date/time of your request along with details. 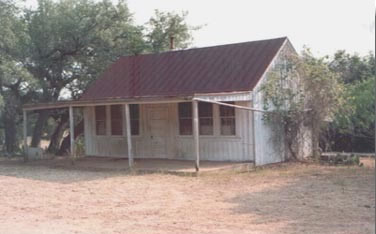 A brief history of Wrede School

Built in 1896. Consolidated in 1960. Lumber to build the school was hauled from Comfort, Texas, by wagon. Classes were first held on October 15, 1896, with an enrollment of 46 students. Enrollment over the years went as high as 53 students in the 1950’s. In 1949, the Pedernales School was consolidated with Wrede and, shortly thereafter, students from Bear Creek School were also consolidated with Wrede. During 64 years, Wrede had 24 teachers. The salary for a teacher in 1896 was $28 per month, and by 1959, a teacher might receive $288 per month. Even though most students did not speak English when they entered first grade, speaking German on the school grounds was forbidden.

A man by the name of Friedrich von Wrede owned the land on which this school was built. Some of the early organizers were Julius Ransleben, May Ransleben, Carl Hilker, Jacob Usener, William Schnerr, Theo Boos, and Louis Crenwelge.

The wood school building was built in 1896 from lumber hauled by wagon from Comfort, Texas. By October 15, 1896, school had started. A hand dug well supplied water for the school, located on the Kerrville Highway close to Lady Bird Park. It has never been moved from this location. Bear Creek school was consolidated with Wrede School in July, 1949. During 64 years, Wrede had 24 teachers who served at different times, some of whom left for a number of years, returning later.

Wrede was a two-teacher school from 1949 until 1959. During this time, the enrollment reached approximately 53 students. The salary for a teacher starting in 1896 was about $28 per month. By 1959, the teacher might have received $288 per month.

The school was also used as a community center where the people would get together for parties and dances. The 4-H Club and the Extension Homemakers Club would also meet here. In later years, elections were held at this schoolhouse.