Our 2022 Open House was held on Saturday, November 12, 2022, from 10:30 a.m. - 3:30 p.m. We included an Open House Activity: Handmade quilts were on display and a quilt was set up for anyone who wanted to learn to quilt and sew from Docent Quilters. Check our Events Calendar for other Friends-sponsored events to attend.

The Albert Community Club meets six times each year during January, March, May, July, September, and December. Members play card and domino games and socialize. A business meeting is held at 5 p.m., followed by a meal. The December meeting is a Christmas social. In July, the club holds its annual barbecue fundraiser. The school is used for reunions, weddings, rehearsal dinners, family parties, meetings, and other community activities.

To schedule a visit or tour when the school isn't conducting a scheduled open house, call the Williams Creek rental contact person below or complete our Contact Us form and select Williams Creek School from the dropdown. Include the date/time of your request along with details. 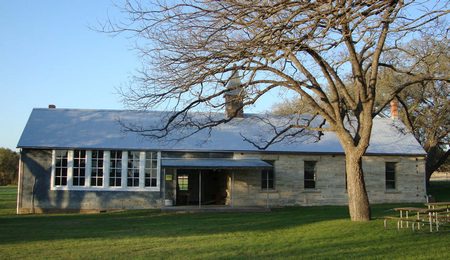 Built in 1897. Consolidated in 1950. The curriculum consisted of arithmetic, reading, writing, spelling, history, geography, and penmanship. During WWI, a new law required all subjects, except foreign languages, to be taught in English, and German was not allowed on the school grounds. There could be as many as eight grades in one room, and older students helped younger ones. On Fridays there would be spelling bees.

In 1891, one acre of land on Williams Creek was bought for $1. A one-room log cabin was built and School District #38 was established. In November 1897, in order to move the school away from the creek to a more accessible area, a new 1½ acre tract of land was bought for $5 in what is now known as Albert.

In this new limestone rock building, lessons were only taught in German for a number of years. Later, however English was also taught. By 1922, two teachers were needed for the growing number of students so another room was added with an enclosed porch between the two rooms. The school enrollment at this time was 70 students. The new room was constructed of wood with a brick-faced tin exterior. Each room also had its own chimney for the wood-burning stoves.

Reverend Arhelger tells what he remembers about the Williams Creek School, from about 1895:

John Merz taught us reading and writing in German and English at the Albert School. He was a scholar in his own right and a strict disciplinarian. The primary language of instruction was English, even though there were only two families in the community that were exclusively English-speaking at the time. Farmers' children grew up on the farm in the cotton patch, but they'd try to have all the cotton picked before school began in September. It was important that the children did not miss school. (from M. Martinello with Ophelia Weinheimer "The Search for Emma's Story")

Another interesting fact is that in 1920 and 1921, future President Lyndon B. Johnson was enrolled as a student. In 1949, student enrollment dropped considerably and the students were contracted to the Stonewall School District. On June 12, 1950, the majority of the qualified voters in District #38 voted to consolidate with Stonewall.