Our 2022 Open House was held on Sunday, June 12, 2022, from 12-4 p.m. We included an Open House Activity: Guests were able to see the newly restored windows and learn how to play various game with cards and dominoes. Check our Events Calendar for other Friends-sponsored events to attend.

The Pecan Creek Community Club meets monthly on the second Sunday afternoon to play cards and dominoes with refreshments being served after a short meeting. An annual picnic or fish fry is also held each summer on the school grounds.

To schedule a visit or tour when the school isn't conducting a scheduled open house, call the Pecan Creek rental contact person below or complete our Contact Us form and select Pecan Creek School from the dropdown. Include the date/time of your request along with details. 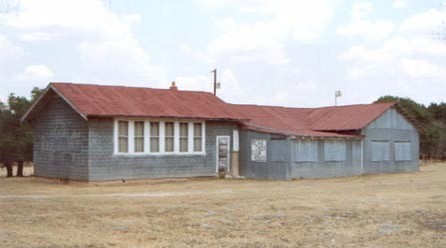 Built in 1916. Consolidated in 1955. Wooden school desks were either double or single with a shelf underneath for items such as cups, pens, and books. Seating was arranged by grade. Several schools still have the original maps, world globes, bookcases, science cases, and the teacher's desk. One of the most important features was the "recitation bench" close to the teacher's desk. Here a particular grade sat for their lesson or recitation.

In 1899, the Bernhard Friedrich house, which was bought for $250, became the first school. This first school was private. The Pecan Creek School #29 is located on a 4.5 acre plot in the north central part of Gillespie County. In 1916, land was donated by school patrons. Other patrons donated materials and labor. The original house was moved in parts and rebuilt. The original building is one big room with windows on the south side, and the entrance, with an enclosed cloakroom, is on the east side. The building is constructed of wood, with siding having been added later. The floors are pine and the ceiling is of beaded board. In 1936, an open shed was attached to the school building. At that time, a stage and dance floor was included which was later improved. Today, there is a permanent 15'x20' stage with a walkway around the back wall.

The stage curtain, still in place, displays many early-day Gillespie County merchant advertisements. Blackboards cover part of the west and north sides of the room, and a wood burning stove stands near the back east side. There is a bookcase on the east wall. Also still standing about 30 yards west of the school is an outdoor toilet for girls, with the boys outhouse 60 yards to the south. A rainwater cistern for drinking water, which is no longer in use, was added in 1934 on the north side. Double desks, purchased in 1935, are still in the classroom, as well as a world globe purchased in 1936, and a dust-proof map case containing nine maps purchased for $43.62 in 1938. In 1988, 105 years after the beginning of school in the Pecan Creek area, a reunion was held. Six former teachers and 83 former students attended. Mrs. Albert Menske (Hilda Crenwelge), a former student, was the oldest at 94 years old.